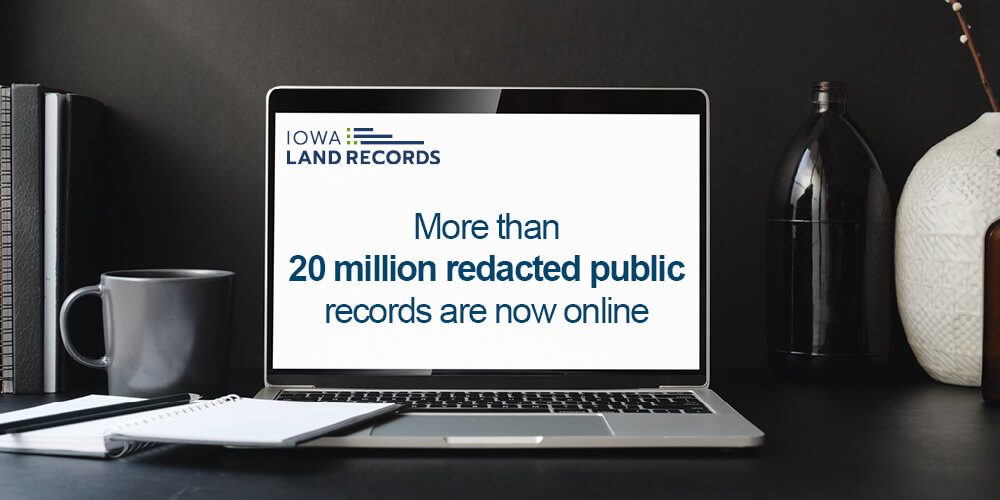 Making public records accessible online to the public and the real estate industry is a core legislative mandate for the Iowa Land Records system. Section 331.604 of the Iowa code includes the following charge: “developing county and statewide internet sites to provide electronic access to records and information.” When the Iowa Land Records website was launched in January 2005, only a few thousand records were posted online. By the end of the first year, there were records from every Iowa county posted online, and the measure was in the hundreds of thousands.

In the period between 2009 and 2011, records were temporarily removed from public view while a comprehensive project was undertaken to redact personally identifiable information from the records posted online. In August 2013, a significant milestone was reached – more than 10 million redacted public records were posted online. Each year thereafter more than a half-million newly recorded documents were posted online, and many counties engaged in projects to digitize older records.

Looking ahead to this next decade, Iowa county recorders will continue to add more newly recorded documents to the system, and many counties will continue to digitize more historical records. Additionally, the Electronic Services System will be exploring ways to improve the land record search application and integrate with other land records data for the benefit of the real estate industry.